October 20, 2011
A month long conflict at the construction site of the Zurich main train station ('HB' or Hauptbahnhof), boiled over this week, as workers tunneling under the station went on strike. Urine and excrement expelled by outhouse-style toilets in older trains continue to drip down on to the workers whenever a train with 'outhouse' toilets parks over the construction site. This issue was raised several months ago, but has now boiled over again.

Overall project leader Roland Kobel, chief of the two billion CHF 'diameter line', complained of "coercion" and hinted at legal action. "Every delay is wasting taxpayers money." The labor union is unimpressed, and is demanding contractual guarantees that the problem will be remedied before returning to work.

While Kobel is surely correct in his assessment, labor conflict could endanger his project, cause delays and raise the costs, he has missed the point of the root cause of the problems. The ongoing 'Urine Strike' reminds me a cartoon depiction of corporate life: 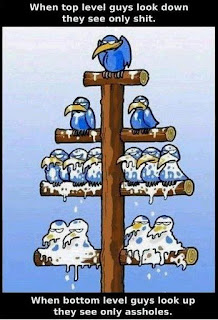 Roland Kobel has demotivated, unhappy workers because of the crap literally raining down on them. The workers have gone on the street in protest both because of the conditions and because a previous commitment to fix the problem was not -- in their eyes -- upheld. He is now being held accountable for those commitments.

How can Roland Kobel fix this problem and help ensure the success of his project? He should apply the values and practices of Radical Management to create a constructive, engaged atmosphere.
Financial success does not come by focusing on the money. A complex project is successful when the people with the vision and the people doing the work communicate effectively. They do the right things well and react to new things promptly. Trust, respect and engagement: the cornerstones of successful endeavors!