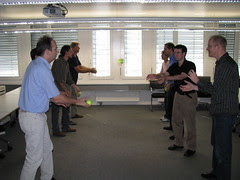 The Ball Point Game (or Tennis Ball Factory, as I like to call it) is one of the most popular games for learning Scrum. This game encapsulates the essence of Scrum like no other: Team-Work, Planning, Retrospectives, Estimating. Continuous Improvement. Everything. But as defined by Boris Gloger, you need 5 people to play. Teaching to a small class, I needed a version which would work with three people. I almost gave up, until I realized that most people have two hands.

The rules of the ball point game are simple: To score a point, everyone in the group must touch the ball once. The ball must have "air time" when the ball is not touching any player. No one may pass the ball to their immediate neighbor. The objective is to score as many points as possible in 2 minutes. The team gets several attempts to improve their score, with a retrospective between each attempt.

If the team is 4 people or less, these rules don't work. The immediate neighbor rule can't be satisfied with 3 people and with 4 people, that rule produces two closed loops.

I modified the game as follows:
I tried it out at a Practical Product Owner Training last week,  and it worked just fine. As usual, the team moved closer together between the first and second attempt. The team improved it's performance dramatically from the first to the fourth attempt. Using the left hand was a challenge, but not insurmountable (lost balls were a topic in the retrospective). An important fun factor for the Scrum Training was preserved, even in the small group.

How did it work: Here is the team in action on their final attempt: